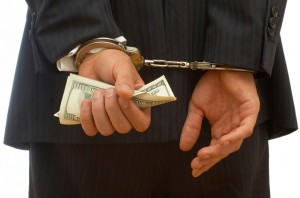 As many smart business people know, cheating on your taxes is really just an express train to destruction.  The tax department employs thousands of people who’s only job is to catch you cheating.  Simple math will point out that the benefit of cheating is far outweighed by the punishment (jail, fines, etc) and the high likelihood of getting caught.

In the past the tax department has always had to manually look for fraud or inaccurate statements.  With the rise of cheap computer equipment this has changed.  You can expect that your tax return will be analysed by not just people but very advanced computer programs designed to find fraud.  One such method is checking your government returns like income statements, taxes collected and remitted, bank records, etc against your reported earnings and expenses.

The tax department also has millions of people filing their taxes, so you can even expect things like statistical analysis of standard returns.  Things like looking at the average tax return from the last few years and comparing how far from average yours is.  Too far and you’ll be flagged.

There is a new, or actually old (discovered as far back as 1881), tool that has recently been added to the tax departments war chest for finding cheaters: Benford’s Law.  Basically Benford’s Law states that in naturally occurring numbers, the number one will appear as the first digit more often than other numbers.  The number 1 occurs as the leading digit 30.1% of the time.  The number 2 occurs significantly less at about 17.6%.  This continues all the way down to the number 9 which actually only appears as the leading digit about 4.6% of the time.  (source: wikipedia)

This counter intuitive approach to numbers is completely opposite of how most people would invent numbers.  Most people would create numbers by making sure they look approximately random, which would typically mean that each number would appear about 11.1% (1/9) of the time as the leading digit.  While this does make for a random number it would seem that random is actually not how the real world works.

What does this really mean for you?  Essentially it means that cheaters are going to get caught.  It also means that if you are still really wanting to commit fraud you will have to become even smarter.  The tax department has years to keep re-examining your tax returns so you not only have to beat the system now, you have to keep beating the system for years to come.

Fortunately, those who follow the laws don’t have to use statistics to make sure they don’t get taken to court because of some “math”.  Facts and tax law are still the only way the government will reassess you or take you to court.  The new advanced math methods are simply used to flag possible issues for further analysis.  A false positive may only result in the tax department manually checking your returns or possibly contacting you for some clarifications.

Benford’s Law can also be useful in other situations for a business.  Keep a watch as I cover those opportunities coming up.