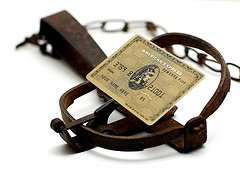 With both Canada and the United States rolling out plans to create new credit laws for the credit card industry.  It seems worthwhile to take a look and see how this might affect recession recovery.

The rules introduced in the US on Wednesday appear to be quite similar to the Canadian rules that were unveiled on Thursday.  Critics have been complaining that these new rules will cause less credit to be available for consumers and drive the economy backwards.  While this possibility does exist I believe that the opposite is true.

The recession that we are currently living in was caused by one thing: too much easy access to credit.  The banks and various lenders were basically giving money to anyone with a pulse.  Lending money is quite good for the economy, it can allow people to purchase items without using cash.  Basically it allows people to own things before they technically deserve to own it, for example your home.

Creating rules and laws to prevent this foolishness by the credit industry is only choice left for government.  If the credit industry could self regulate than we wouldn’t be experiencing a recession.  Limiting who can access credit and basically how much they deserve will prevent people from spending way more than they can possibly afford to.

These new regulations are in no way onerous or unkind to the credit industry.  Actually, every single rule I have seen thus far, is a rule that customers of credit cards have expected to exist for quite some time.  Things like an interest free grace period and being informed when interest rates change are rules that customers have expected for a long time.  Applying payments to the benefit of a customer and asking a customers permission before changing how much credit is available are items that should have been offered by companies long ago.  Any company that had offered these features only a few years ago would own most of the credit world.

The only item that anyone could complain about is new rules being put into place to make it a little harder to acquire credit in the first place.  Since most of our problems were caused by too much access to credit, I believe that these rules are a first step to solving the original problems that caused this recession.

Credit should be a privilege, not a right.  I am one of those people who didn’t apply for a credit card when it was easy to get.  I applied later and was denied so many times.  I had to fight to build a good credit rating and finally won my credit card.  This is something everyone should have to go through because it teaches people to respect the credit card and to respect the power of money.

Since I pay off my credit balance each month these new rules basically don’t effect me at all.  The effect that I will feel is the confidence I have in the industry.  Now I won’t have to feel dirty each time I talk to my credit card company.

I feel confident that creating laws for the credit card industry, especially laws that reflect common sense, isn’t bad for the industry.  These new laws should provide a boost to the economy because people will be able to trust the sources of credit just a little bit more.