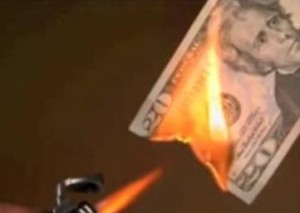 Another sign that the recession isn’t ready to give up yet.  Credit card delinquencies are on the rise.  A credit card account is considered to be delinquent if it has not been paid for at least 3 months.

Since credit cards are one of the major profit centers for banks, an increase in delinquent accounts cannot be good for them.  The scary part of this whole fiasco is that most of the companies seeing an increase in failure to pay are also the companies that the US government have stated are financially sound.

I have a hard time believing that an increase of 9.1% in a quarter could be considered financially sound.  With 1.32% of credit card holders in default right now I can imagine that we are going to see even more financial issues coming up.  The new credit card rules aren’t making it any easier for banks to balance their income and expenses either.

To top everything else off the US government is now allowing 10 major banks to repay the TARP funds granted.  Since each of these banks are also major credit card issuers I am skeptical how sucking out every penny of these banks operating capital to pay off the government bail out funds will ensure a successful banking system.

Is the economy getting worse or is the news finally catching up to us?  Its hard to be sure, what I can be certain of is that things aren’t quite as rosy as the banking industry wants us to believe.  Hang onto your hats and expect a bumpy ride ahead.

6 thoughts on “More Credit Failures, Is The Recession Winning?”