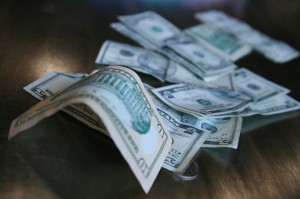 The question I have been hearing a lot lately is if the recession is over.  This recession has been quite hard on almost everyone, so knowing when it has ended is a very valuable piece of information.

I personally would love to see the recession over and a return to the good times during the boom we were experiencing.  While this is a personal wish of mine I have learned that wishes and wants are nothing.  Our economy will go in the direction it wants no matter what my personal preferences are.

Extreme Government Spending
Every government around the world has caught a pretty severe case of spend-itis.  This can be a positive factor for the economy because money actually passes through 6 different hands each year.  A dollar spent by the government, however unwisely, will be spent 5 more times in a hopefully wiser way.

Fears of Inflation
With huge spending always comes costs.  Its impossible to push more money into the economy without devaluing everything.  Governments think they can manage this but when looking at a country like Zimbabwe I’m not so sure.

Collapsing Banks
What everyone has pointed to as the cause of our current problems.  The banking system has over loaned money and now everyone gets to pay the tab.  The news headlines are certainly looking rosier regarding banks.  Unfortunately its mostly slight of hand by the most clever financial minds in the world.  Some banks have been cleverly hiding losses by shifting their year end and “forgetting” to report a month of losses while others have just stopped foreclosing.  Stopping the foreclosure process is certainly helping with investor confidence but it doesn’t do anything to solve the fact that people cannot afford the mortgages they got into in the first place.

Foreclosures
This is quite simply a reality of life for lenders.  People will default on their loans, unfortunately with most everyone loosing equity on their homes the temptation to just walk away is growing.  The government in several states has stepped in to prevent further foreclosures from clogging the housing market, while this temporarily helps the housing market the homeowners still cannot afford their house and will be kicked out eventually.

Consumer Confidence
I would say that this is the number one item that led to the stock market crapping out.  People who didn’t bother to inform themselves about investing got involved.  This led to one of the greatest growth rates in the stock market of all time.  Unfortunately if that ends, even for a little while, people start to doubt themselves and start to panic.  The panic leads to, well, everything coming crashing down.  Confidence seems to be heading upwards lately which is very good.  I’m worried that some people who don’t have the stomach for downturns have put their money back into the market though.  If some banks start to fail or other problems start to surface again I fear for a much greater stock market fall.

When looking at these signs of the economy its pretty hard to feel positive.  Why is everyone feeling positive about the economy right now?  The same reason everyone felt negative about the economy a while back, if you don’t know enough just go with the flow.  My personal feeling is cautious.  If the government actually puts into action some laws and rules to prevent this type of banking failure from happening again I would feel more confident.  Right now I’m waiting to see if the government is fast enough to react before their house of cards starts to fall down once again.

One thought on “Has The Recession Ended?”