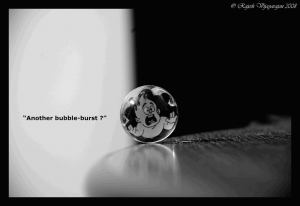 With so much talk about major companies declaring bankruptcy lately I decided it was time for me to learn a little more about bankruptcy and discover how it might affect me.  During my research I discovered just how much I didn’t know and this article was born.

Bankruptcy has a long and interesting history dating back to ancient Greece.  Back then if you couldn’t pay your debts you became a “debt slave” and were forced to work menial labor until you paid off your debt.  Usually the limit of work was 5 years though.  I think that if this were part of the law now we would find a lot less debt going on.  Wikipedia even says:

According to al-Maqrizi, the Yassa of Genghis Khan contained a provision that mandated the death penalty for anyone who became bankrupt three times.

You can just imagine what the business community would be like today if these laws were still present.

Nowadays bankruptcy is a way of declaring to the world that you are completely incapable of paying the obligations that you have agreed too.  This can be due to taking on too much debt or often because business has taken a nose dive.  Either way bankruptcy is a legal procedure to help to smooth the transition of your legal property into the hands of those whom are owed money.  I assume this was to avoid the breaking of hands and legs by overzealous creditors.

Every country in the world seems to have their own laws applying to the specific details of bankruptcy and rules for what can and cannot be included as assets in a declaration.  I will focus mostly on business details of bankruptcy, but most of the principals apply both ways.

Most countries have 2 generic types of bankruptcy.  These can be categorized as liquidation bankruptcy and protection bankruptcy.  Obviously for either type you would need to be insolvent, but the principals employed are a little different.

This is commonly known in the US as Chapter 7 bankruptcy.  It occurs when a company has crashed and burned itself out and they have decided to not bother continuing business.  All business assets are compiled and they are sold off to pay the debts of the company.  Since there isn’t enough money to go around various contracts come into play to decide who gets how much money.  This type of bankruptcy can often take months or years in the court system for everyone to eventually agree how and how much.

We are seeing more and more of this type of bankruptcy.  This is commonly known as Chapter 11 bankruptcy.  It occurs when a company falls on hard times but would like to continue operations.  A court ordered restructuring will occur under supervision of the creditors with the eventual goal of the company operating afterwards.  Since everyone actually has to agree to the terms of the reorganization this type of bankruptcy can actually take longer than a liquidation bankruptcy.

I will follow up tomorrow with more details on how these types of bankruptcies are being applied and where.

One thought on “Bankruptcy Explained”